Universities and Institutes are considered to be the most important foundation for the growth of any country. It is the place where most of the basic research is carried out, giving way to inventions. As Intellectual Property Rights (IPR)act as a shield to such invention from being misused by third parties and help in the commercialization of these inventions, it is highly recommended that such inventions be protected under the IP domain in order to guard the owner’s interests in order to infuse development in the respective field of invention.

Often times, since students are the ones who carry out research that may lead to inventions, it is imperative for them to get these inventions protected in order to commercialize the mas well as thwart misuse of the same by third parties. Moreover, there are various reasons why Academic Institutes or Universities should consider filing a Patent Application for the protection of inventions that have been carried out on their campus.

The existence of IP policies in institutes and universities is a strong indicator of their commitment to promoting the generation, protection, and commercial exploitation of IPRs.

In 2001, due to the growing importance of IP institutional policies, WIPO published a booklet entitled Guidelines for developing IP Policies in African Universities and Research Organizations. While the publication title suggests that the guidelines are aimed at African institutions, the content is universally applicable and, as a result, the guidelines have since been used in several developing countries. Recently, a second edition was compiled and is currently awaiting publication entitled Choices in Developing IP Policies in Universities and Research Organizations. It addresses ten issues that senior managers of universities and research organizations may wish to consider while developing institutional IP policies.

Some countries have prepared model IP policies that universities and research organizations may adapt, depending on their mission, research culture, and agenda. For example, the Nigerian Office for Technology Appropriation (NOTAP) has prepared a model IP policy, which it has made available to universities and research institutions in Nigeria. This has resulted in speeding up the process of developing IP.

In other words, IP divisions in Universities and Institutions help spread the awareness of the importance of IPR, especially for filing patent applications for an invention. Such awareness and advantages of Patent protection give an incentive to members of Universities for more inventions, leading to greater skills. Thus, University, in the end, produces high-quality manpower that the world is chasing for.

Unlike industrial scientists and engineers who generally are hired to invent and assign rights in their inventions to their employer without any residual rights to additional compensation, university personnel is in a different position. The prime focus of universities is to educate and, in some instances, to conduct technical research. However, in case of any invention during the conduct of technical research, Universities must not lose an opportunity to file a Patent application and take benefits from it thereon. This helps the universities in investing more in R&D and helping them in overall development.

There are many instances where Universities collaborate with industries for innovating in a specific domain, which gives a lot of exposure to its faculties and students and helps them gain a position in these industries, leading to a lot of acknowledgment of the respective Universities. This, in turn, encourages the entire Academic ecosystem to do more research leading to useful inventions, leading the country in becoming the hub of research and development.

One such occasion where innovation ecosystem was built was for Drug discovery, in which recently about 45 MoUs were exchanged between Pharmaceutical industries and central institutes such as IITs, IISCs, NIOERs, IISc-B, NIFT NITs, RGIPT, RGNIYD& SPAs. It is steps like these that have led India to enjoy the position of leadership in the world’s pharmaceutical market in Generic medicines. Much of the credit also goes to a policy initiative in terms of Patent Act, 1970 which allowed process patents, enabling in transforming India from medicine importing country to exporting country and Private and Public skill and entrepreneurship of the Pharma Industry.

Further, It is observed that India has been increasingly getting involved in research and development, so much so that, various Multinational Corporations across the world have shifted their R&D base to India. This is a significant reason as to why Indian Universities should file for Patent applications as all of the above facts give incentives for the Universities to innovate more useful products that help grow the society as well as the economy.

The Government of India amended the Patent Act by introducing the following policies that give incentives to academic institutions to protect their inventions under the Patent law.

Such a reduction in filing fees for individuals, small entities, and start-ups will help students to file a patent application without any inconvenience. The objective of the aforesaid policies is to stimulate a dynamic, vibrant, and balanced Intellectual Property Rights (IPRs) system in India to foster creativity and innovation, thereby promoting entrepreneurship and enhancing social, economic, and cultural development

The data as presented below in Fig.1 and Fig.2 shows that Indian universities have become more and more aware of the importance of IP over the last decade. The number of Patents filed by the various Indian Institutes of Technology for instance has increased from 91 in 2008-09 to 400 in 2016-17. IITs continue to top the rank list by filling the maximum number of applications in a year for the protection of their inventions within India, following which, Amity University and Indian Institute of Science score 2nd and 3rd rank. It is to be noted that the Indian Institute of Science has shown remarkable growth in the number of filing Patent applications in 2016-2017 as compared to the year 2008-2009. Further, Amity University recorded more than 23% growth in the year 2012-2013. Moreover, CIPR has filed more than 185 Patents, 29 Trademarks, 39 Copyrights, 25 Industrial Design and has also assisted in filing 12 International Patent Applications. 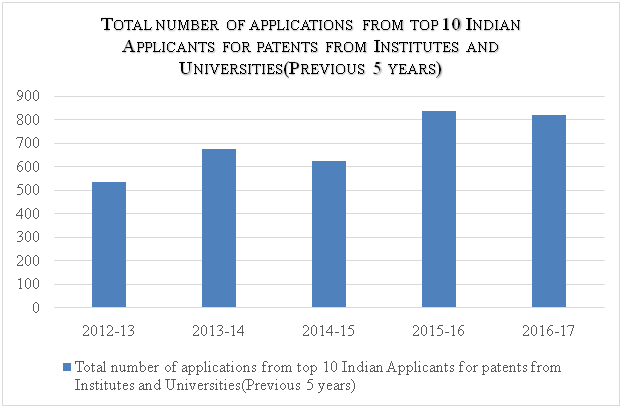 The process of liberalization, privatization, and globalization which started in 1991 has gained momentum in recent times. This, in addition to the fact that technology is increasingly penetrating in all aspects of Indian society, has resulted in greater awareness of IPR among all institutions of India. The foremost among them has been the universities and research institutes.

However, this positive trend of greater awareness of IPR and high growth in the number of patents being filed by Indian Universities have been somewhat limited to just the top universities of India. If India is to become a knowledge-based developed economy and society in the coming decades, the trend of a greater number of patent filings has to permeate to all the Universities of India and not just remain at the top. Innovation has to be at the forefront of this process. The universities need to implement all the above-mentioned steps in order to gain recognition and acknowledgment in the field of research and development and innovation by protecting them through patent law. The need of the hour is to equip our Universities enough so that large numbers of them are able to engage themselves in good quality and innovative research, resulting in socially relevant and commercially viable inventions. Along with this, the Universities also need to ensure they are able to realize the commercial benefits of their invention by using the IPR regime.

Thus only when the recent trend as seen in the top Indian universities are further developed and replicated in other universities, will India truly realizes its goal of becoming an innovative and knowledge-based developed economy and society.

Author: Pratistha Sinha, Associate and Rishabh Nigam, Associate at Khurana & Khurana, Advocates and IP Attorneys. In case of any queries please contact/write back to us at swapnils@khuranaandkhurana.com.