Intellectual property protection is important for fostering innovation. Without protecting the innovations, businesses may not be able to reap the full benefits of their ideas. Companies has started to use different IP to protect their innovations to differentiate their products from others and to avoid infringement of their innovations. In today’s time the risk of an innovation getting infringed without the knowledge of the creator is very high. The world of Intellectual Property has been evolving over the years and the companies has been claiming IP over the products like McDonald’s® golden arches design to the design of the jeans pocket. Claiming IP for the innovation can turn the companies business market value.

Trademark protection is used to protect the brands identity and its products and services.  If any other company starts selling the products similar to that of the other company, customers will get confused as to which is the real product and the faith and credibility of that product will be lost.

Trademark has various types and this article mentions about pattern mark. So, pattern marks is the one which is capable of identifying good and services as originating from that particular company. The eye catching visual helps in uniquely identifying the brand, and helping the customer to associate the product with the company. Recently, Levi Strauss has claimed trademark over the design of jeans pocket. The widening of the innovations under trademark has been adding benefits to the companies.

Since 1873, US based Levi Strauss & Co. has been into the business of development of denim pants popularly known as “jeans” with its headquarter in San Francisco. It has gained its name as one of the most popular clothing brand worldwide. Levi Strauss & Co. adopted “Articulate Stitching Design” mark (the back pocket of jeans connecting arches that meets in the centre of the pocket) in 1873 and since then it has been using the mark on its denim jeans. The earliest U.S. registration for this mark dates back to 1943, whereas in India, the mark stands registered in favour of plaintiff under classes 9,14,18 and 25 of the schedule of Trademark Rules since 1979.

Imperial Online Services Private Limited (IOSPL), incorporated in the year 2012 with its headquarter in Hyderabad, Telangana is a private limited company involved in the business of clothing.

FACTS OF THE CASE

Levi’s submitted that IOSPL continued to sell the denim jeans identical to articulate stitching design mark through e-commerce platforms like Flipkart, Amazon, Myntra, Snapdeal, Nykaa Fashion, LimeRoad, Paytm Mall, www.urbonofashion.com in contravention of an order to cease and desist dated February 16, 2021, calling for disposal of its stock in favor of Levi’s.

IOSPL countering its statement to the Levi’s stated that for the disposal of stock 6 months extension until August 15, 2021 has been sought from Levi but it could not adhere to the statement due to the pandemic and associated lockdown. Also, Levi has asked to cease all the use of Arcuate Stitching Design mark by October 15, 2021 and so IOSPL has removed all such products with the said marks from all platforms by such date.

Despite the undertaking by the defendant as of February 2021, the defendants continued to manufacture and sell denim jeans similar to Arcuate stitching design mark and so the plaintiff was forced to file a suit before Delhi High Court.

On 22 December 2021, the court had granted the Levis Strauss and Co. an interim injunction, inter alia prohibiting the IOSPL from manufacturing, marketing, offering for sale, and selling, whether directly or indirectly, and whether on the internet any goods, most notably denim jeans having Arcuate Stitching Design mark. Levi Strauss & Co. filed a suit before Delhi High Court as the products similar to Arcuate Stitching Design mark were still available on various e-platform. So, the Plaintiff was seeking for permanent injunction, restraining trademark infringement, copyright infringement, passing off trademark, and other reliefs in respect of the ‘Arcuate Stitching Design‘ mark including prayer for the non-traditional trademark in question, namely the ‘Arcuate Stitching Design‘ mark, to be declared as ‘well-known’ within the provisions of Section 2(1)(zg) of the Trade Marks Act, 1999.

The curved stitching design on the pocket of the jeans manufactured by the defendant was confusingly similar to the ‘Arcuate Stitching Design Mark’ registered in favour of the plaintiff within the meaning of Section 29(1) of the Trademarks Act.

In recognition of the trademark rights and common law rights in the ‘Arcuate Stitching Design mark’ in favour of the Levi Strauss and co., the suit is decreed in terms of paragraphs 76(a), 76(b), 76(c), 76(d) of the plaint and defendant is restricted from any statutory right in respect of arcuate stitching design mark.

In this judgement, Justice Pratibha M. Singh, while delivering the judgement on 24 March 2022 which is set to become a landmark precedent in the area of protection of non-traditional trademark in India, observed that

Under the law of trade marks, the definition of `mark’ has evolved over time. Traditionally, trademarks included names, words, devices, logo, label/packaging, letters, numerals etc. However, this list of trademarks has expanded over the years to include colour, combination of colours, shape of goods, patterns of products, smell, and sound marks etc. These broad two categories of marks are loosely referred to as – ” Traditional Trademarks

The non-traditional trademark in this case was the ‘Arcuate Stitching Design’ mark used by the Levi Strauss and Co., duly protected under trademark registration number 851939 with a ubiquitous features on all their jeans.

PROTECTION OF STITCHING MARK UNDER TRADEMARK 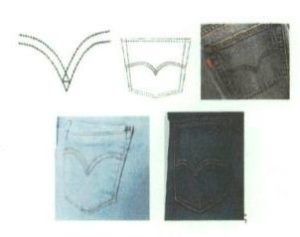 In this case, the question relates to a stitching pattern that is not a product design but a pattern incorporated on Levi Strauss jeans products. So, this present case dealt with whether the stitching pattern which is not a product design but merely a pattern incorporated on plaintiff’s products serve as a trademark? Levi Strauss and Co. has sought for the protection of the Arcuate Stitching Design trademark as per Section 2(m) of Trademark Act, 1999.  The court concluded with a positive answer stating that there may be a large number of stitching patterns which may be merely for aesthetic or visual appeal. However, when a plaintiff’s trademark stitching trademark identifies a jeans, even without a name or a logo, the pattern fulfils its purpose in serving as a plaintiff’s trademark.

In McCarthy on Trademarks and Unfair Competition [4th ed., Vol.1,], J. Thomas McCarthy while dealing with geometric shapes as trademarks format opines as under:

“However, uncommon or unusual shapes and symbols that contain some minimum amount of inventiveness or fancifulness can be regarded as inherently distinctive and protected as such, without the need for proof of secondary meaning. The issue is whether this shape is so unusual for this type of goods or services that its distinctiveness can be assumed.”

The plaintiff also referred to a ruling passed in Lois Sportswear, USA Inc. v. Levi Strauss and Co., the US District Court for the Southern District of New York, while considering the plaintiff’s trademark held that “Levi’s arcuate mark is a strong mark that needs a high protection. The mark is a fanciful design which has no function other than as a source indicator.” For determining the strength of the mark, the plaintiff has provided the evidence of widespread advertising and promotion of Levi’s jeans featuring Levi’s arcuate mark, continuous use of mark for more than a century, and sales of more than 800 million pair of jeans baring the Levi’s mark since 1971.

Trademark being one of the important intellectual property protects the interest of the inventor. There might be many infringement cases going unnoticed. The recent case discussed above was one such case, if the Levi’s had paid no attention, IOSPL would have been infringing the innovative arcuate stitching design mark of the Levi’s. The court’s stance in taking a strict action against the infringers is a relief to the right holder.

Author: Bhargavi Nimje – a student of Shri Navalmal Firodia Law College (Pune), in case of any queries please contact/write back to us via email chhavi@khuranaandkhurana.com or at Khurana & Khurana, Advocates and IP Attorney.